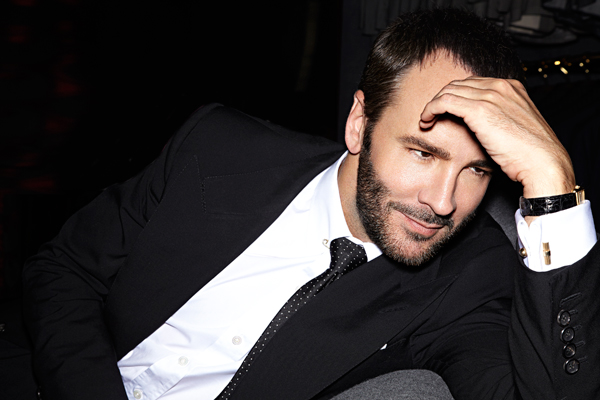 We’ve already established that I have a soft spot for interviews that really get to the “heart” of what makes Tom Ford tick.  The ones that hold my interest are those that go beyond what his latest designs look like or what plans he has hidden up his sleeve.  They are the ones that really delve into his personality and offer insight into the man instead of the Brand.

Close friend Lisa Eisner recently interviewed him for a one-on-one “Bergdorf Goodman Conversation“ and it’s a good one.  It’s clear that the two of them have a lot of respect for one another and he opened up to her in a way we seldom see.

Some of my favorite tidbits are:

On turning 50 in August:

On how he views his life at the moment:

I’m perfectly happy.  I could die tomorrow.  I feel like I’ve experienced so many things, and I’ve been so fortunate. I’ve had a great relationship in my life.  I’ve had wonderful dogs.  I’ve had a great career.  I’ve had lots of things that have fulfilled me.  I hope that I don’t die tomorrow.  There are other things that I’d like to do.  I hope that I get to be a little bit wiser and smarter, and keep learning things, and I’m looking forward to my old age in Santa Fe in my nineties as a sculptor—maybe wearing a lot of dark eye makeup like Louise Nevelson.  I don’t know.  I might have a Johnny Depp/Santa Fe/Louise Nevelson–sculptor moment in my nineties.

On often feeling like he is working 24 hours a day:

New York is very much work for me.  When I used to live in New York, I had days where I didn’t have anything to do, and I’d wander around and go to art galleries, go to museums and walk around the streets, which I love, because I love New York.  But my time there now is so limited, all I do is work, twenty-four hours a day.  I have to work this weekend and finish all of my collections so that I can hand them off on Sunday evening, and I’m in Beijing Monday–Tuesday, in Shanghai Wednesday–Thursday, in Hong Kong Friday.  Friday night I come back.  I have one day off in London, and then I go to Milan, and then straight from Milan to Santa Fe.  I mean, I work.  And with computer and email, I think we all work twenty-four hours a day.  I miss the days when you left your office and your assistant and you couldn’t work any more until Monday.

On the Tom Ford Woman:

The Tom Ford Woman for me is somebody who has her own sense of style.  I don’t mean to say you always wear the same thing.  You change and swing.  You have different moods.  It’s not necessarily related to what you’re reading about in fashion magazines.  You have a look… and so my favorite customers, both men and women, are people who know themselves and what they like, what they don’t like, and what works on them… I don’t enjoy seeing a woman dressed in my clothes from head to toe exactly the way I showed it on the runway.  I love when I see somebody who looks amazing and they happen to be wearing one of my jackets and a pair of shoes, they’re mixing things, and they know who they are.

On being recognized as a celebrity:

I always think, I’m not a celebrity, I’m not a film star, I can walk around on the streets, and then, when I do, I realize I really can’t.  If I walk very fast and I don’t stop, maybe.  If I linger, somebody comes up to me.  They usually ask if they can take their picture with me, like I’m a building.  It’s very strange… I do hate it. I’m a very shy person.  The other day I was at the airport with Richard [Buckley] waiting for my luggage, and I heard people talking about me.  I tried to avoid eye contact with them.  And I had a flashback to when I was a kid, and everybody was making fun of me.  I was the kid that everyone bullied at school.  I was not like every other kid, especially in Texas.  I wore a little suit and carried a briefcase in the third grade.  I was completely different.  I was terrible at team sports.  I was not popular.  So when I hear people saying my name and I can feel them staring at me, it’s a throwback to something I want to run from.

On the idea that men look good with age:

If they take care of themselves, they do. If they don’t, they don’t.  Whether you’re a man or a woman, you have to take care of yourself.  You don’t have to care about your looks.  People reading this may think, Yeah, they don’t believe that.  But looks are not the most important thing, by any means.  But if one does care about one’s looks, key number one is stay thin. I’m the same weight now that I was when I was thirty-three years old.  I weigh myself every day.  If I gain more than three pounds, I eat vegetables for two or three days until I get back down to my weight.

I eat healthy foods.  I don’t eat any fried foods ever.  I never ever have ice cream; I probably haven’t had it in fifteen years.   I eat sorbet instead.  I definitely watch what I eat.  Then, on top of it, I eat candy. [laughs] It’s true! I eat really healthy foods, but then at least once a day I eat some total piece of junk sugar… I quit [Diet Coke] because of the artificial sweeteners.  I’d been trying to do that for years.  I don’t drink alcohol, I don’t smoke cigarettes, I don’t do any drugs.  It’s very exciting.  A life on water… You actually discover that water has a flavor… I’m kidding.  Water is so boring!  But that’s all I drink.

I think it’s a reaction against what we went through in the ’90s, which was a mass globalization, thanks to the Internet. All of a sudden, all over the world, everyone was watching, looking, wearing, drinking the same thing at the same time. We’re experiencing a backlash to that, and everyone all over the world wants to be an individual.  There are some cultures that are just awakening to materialism, that have been deprived for so long, and feel the need to look like everybody else, to say, “Hey, I’ve made it too, and I can afford this product as well.”  But in mature cultures, there’s a new sort of individuality now.  You can go online and get any obscure work that you might not have been able to find before in a bookshop, or a rare film… everything can be online, you have things that were less well-known that have become very well-known because they are accessible. Does that make any sense?

Those are just a few of the many highlights in this interview… I could easily go on and on, but then I’d basically be reprinting the whole thing.

This one is a must read for the Tom Ford fans out there!  Check it out in its entirety here.