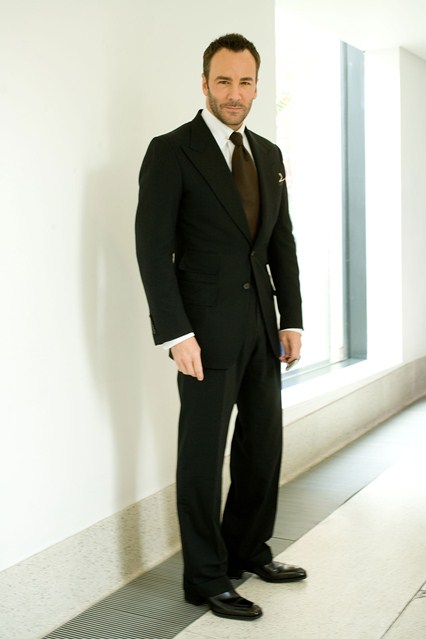 On April 20 – 21, 2012, Vogue held it’s first ever fashion festival in London. The Vogue Festival, in partnership with Vertu, brought together some of the biggest names in fashion and gave attendees access to some of the greatest minds in the industry.

Unsurprisingly, one of the most-talked about highlights was a session with Tom Ford. British Vogue editor Alexandra Shulman sat down with Ford for a candid discussion that was both entertaining and informative.   For those of us who were not able to attend, the full video is now available for our viewing pleasure (yay, technology!).

Plus, a few of my favorite quotes from the session:

On his worst characteristics: “Perfectionism to the point of insanity. It’s horrible. And probably telling people that their brows aren’t right, or that their breast implants aren’t the right shape, or actually showing them how to massage them so they become the right shape. Or, you know—honesty.”

On the first time he saw something with his name on it: “I also remember the first thing I saw with my own name on it, which was a little freaky, it was a pair of sunglasses.  I had been used to seeing my name attached to GUCCI or attached to Saint Laurent or attached to—but I remember when I saw this, it was—you, know, it meant something to me.”

On quality clothing versus trends: “I think good clothes, even if they are created in a moment of strong trend, but good clothes really last forever… Yeah, I do want to create things that people keep.”

On nature: “I like being outside… because nature is totally imperfect, but yet it’s absolutely perfect.  So for me it’s restful, because I am not trying to redesign a tree, or change the shape of a rock…”

On trying his own beauty products: “I put every single thing [from the Beauty Collection] on. I don’t wear it around on the street, but yeah, how does it feel, how does it cover, what does it do. You know, I haven’t had all the eyeshadows on, but I’ve sat and worked on girls with everything to make sure it blends well. But sure, you try all those things.  It’s important. You know, I’m accused often of being what’s called a control freak, but I think when you buy something with someone’s name on it, you should know that they themselves worked on it and it was just exactly the way they wanted it. Not this way, not that, but that way. I don’t see anything wrong with that.”

On his small, intimate brand presentations: “The reason I present in a very small controlled way—and do it myself—is that so much of what makes my clothes, I think,  special is… the lining.  The stitching. The cut. The shoulder pad. The shape. And you can’t see that on a runway. I mean on a runway, in a way, you almost have to exaggerate things a bit so that they read so that you can see them. And in creating clothes that I hope will last a long time it’s best if I can actually show these things in the way that the consumer is going to respond to them.

And having done big shows for a long time, I’ll equate it maybe with being a publicly traded company. Sometimes you start to do things for the short term. You know, in a publicly traded company you might make decisions that you wouldn’t make if you weren’t worrying where the stock prices was gonna go the next day. And in a fashion show sometimes you, if it’s big, and you know it’s going to be reviewed the next day all over the world, you might make decisions you believe in a little bit less because you’re worried about the review. And I didn’t want to have that pressure. I wanted to really make—I wanted to respond to the customer.”

On gay/straight terminology: “I hate to use the words gay and straight, and I think we’re all on some sort of sliding scale. Of course, I’m at the Richard Buckley end of the scale, but I hate that gay/straight thing.”

Did you watch? What did you think?